Midam: Creator of Game Over

Like Hergé and Franquin, it was in the Brussels commune of Etterbeek that Michel Ledent, called Midam, first saw the light of day in 1963. As a child he adored monsters; he also dreamed of becoming a lorry driver so that he could work at night and listen to the radio broadcast “Les routiers sont sympa” (lorry drivers are nice) in his 30-ton vehicle.

But when at the age of 18 he chose the orientation of his studies, he turned, somewhat by chance, to the artistic specialities. First he did interior decorating for a year, then photography for one year as well. In the end it was in illustration that he earned a diploma at Saint-Luc, a famous school in the Belgian capital.

But the revelation of Midam as a cartoonist and cartoon scriptwriter would have to wait. After his studies of illustration, he did his military service in the Belgian Naval Force as a designer-decorator. The following years consisted of hard labour and small orders for various reviews and newspapers. 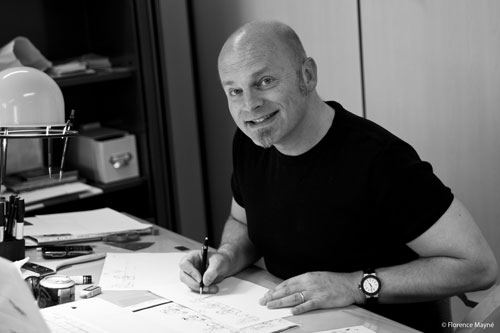 In 1992, he brought sparkle to various sections in the Spirou’s Magazine, but it was only a year later that he revived the section devoted to video games by creating the character Kid Paddle. The enthusiasm of the readers encouraged Midam and the chief editor of Spirou to go from a half page to a full page. Then naturally, in 1996, the first album of Kid Paddle was released.

In 1997, Midam created a new series: Histoires à lunettes (stories with eyeglasses). He worked together with Clarke (Mélusine) by entrusting him with the graphic production of the series. From this collaboration three albums arose which, for all their failure to meet with commercial success, aroused a more favourable reception among the critics.

With the success of Kid Paddle, the idea of making use of this character in other media supports was not slow to come. In 2002, the first Kid Paddle Magazine appeared. One year later, a first season of 52 episodes presented Kid Paddle in animated cartoon from and invaded the screens of France, Belgium, Switzerland and Canada. So far, 104 episodes have been produced and broadcast multiple times in more than twenty countries.

In 2004 Midam produced a “spin off” series of Kid Paddle entitled Game Over, putting the spotlight on Kid Paddle’s virtual avatar, that is: The Little Barbarian. For this project, Midam worked together with Adam Devreux for the drawing and surrounded himself with various scriptwriters. This series of cartoons has become, like its parent series, a best-seller in publishing.

The frenzy around Kid Paddle and his determination to produce other artistic projects forced Midam to leave behind what had formerly been his passions: micro-magic and music. With regret he left the group “le Boys’ band (dessinée)” for which he was one of the guitarists for around ten years. Nonetheless, he remains a fan of music, film and travelling. Incidentally, it was in the course of one of his trips that Midam fine-tuned a new series of cartoons entitled “Harding was here”.

This series, scripted by Midam and illustrated by Adam, handles the history of art with a humorous tone. The result of several years of work, the first volume was published in 2008 by Quadrants. 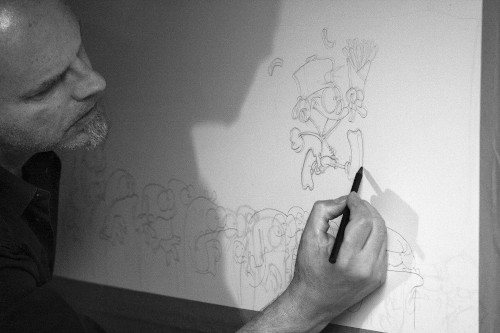 Since the appearance of the first volume, more than ten million albums of Kid Paddle (in French) have been sold. Hundreds of derivative products have been created in the image of Kid: clothing, shoes, card games, skateboards, tattoos, video games, screen savers for mobile phones, figurines, toys, puzzles, beach towels, duvets, paper goods, bags, etc. To ensure a maximal quality of these products and to manage the multitude of activities that Kid Paddle has given rise to, Midam went into partnership with his wife Araceli Cancino and they created the company Midam Productions.